Tonight we joined friends Bob and Diane at a local restaurant with some of their friends to listen to a 17-piece big band play in the New Year. It was great music and June and I even braved it out on the dance floor a few times. There’s no way we could match the many couples there who actually knew how to waltz/rumba/cha-cha etc, but what we lacked in technique we tried to make up in enthusiasm! It really was a very enjoyable evening.

And so dear reader, this brings us to the end of this iPhone Project 365. Which always means — I DID IT!! I was able to take a least one photo every single day of the year. Not all of the photos were winners of course, but I never expected them to be. More than anything, it was the discipline and the desire to shoot something different every day that made this such a rewarding, challenging (and at times exasperating) exercise. Some days I woke up with an idea of what that day’s photo would be, but most of the time it was a case of just waiting to see what each day held. A project like this forces you to look at things in a different way and the trick was being able to recognize where an opportunity might be, each and every day . (Even today while driving around , I saw something that I thought months ago would be interesting to photograph — and I never did get back to it to include in this project.) It is with a sense of both accomplishment and relief then that I bring this project to a close, and for all of you who have stuck with me throughout this journey, thank you. Your regular visits to the blog, feedback and sharing of these photos with others has been very humbling and much appreciated. What next?? I really have enjoyed this process, but I want the next go-around to be something more than just a continuation of this one. I have a few ideas in mind for how I can shake things up for the next Project 365 to make it a bit different, so I’m going to take a couple of weeks to really consider the options and then get back at it again. (The good thing about a Project 365 is that you can start and end at anytime.) In other words, I plan to be back in the saddle again after a short break, so if you’re willing to come along for another ride, I’d love to have you along. Stay tuned! 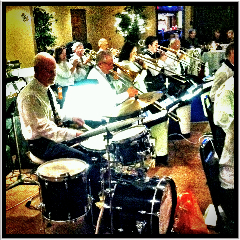 We’re having a few friends over for brunch on New Year’s Day, so June and I headed to the supermarket to buy some more provisions. While we were standing in the fruit and veg section. I grabbed a shot showing the “slippery floor” sign and the rows of produce and then had a bit of fun with it. 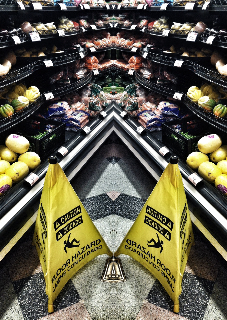 A few days late for a white Christmas, but we were lucky enough to wake to a nice coating of snow this morning. Although I’m not a fan of the cold, I do always enjoy how a covering of snow changes the looking or everything, including these colorful flowerpots on a shelf on the back fence.

For the non-US readers of this blog, something we have to do every year here is winterize the lawn equipment — that is prepare to put these machines to bed for the winter since they won’t be used again until March or so. Normally I have this taken care of WAY before now, but for one reason or another, I’ve been late getting this done. I took care of the lawn mower and the string trimmer last week, but June’s rotary tiller was with a friend of hers so it didn’t get done at the same time. Which is why I’m just getting to it today. So I drained as much fuel as I could pump out of the tank and they started it up to burn up the rest and also heat up the oil so that I could drain that too. The tiller ran a lot longer than I thought it would — there was more fuel in the system than I expected — so neighbors, my apologies for disturbing the peace. But at least now all of the power equipment is tucked up for the cold winter months. 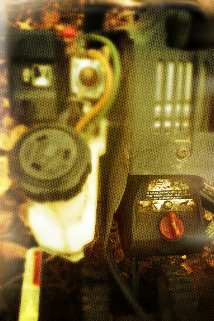 After getting a haircut this afternoon, June and I arranged to meet for coffee before running a few errands. While I waited for June to arrive, I grabbed this shot of a pizza place we tried recently, the Mellow Mushroom, which is right next door to the coffee shop. The pizzas are good and they have given them some great names, like the Kosmic Karma and the Holy Shiitake Pie. 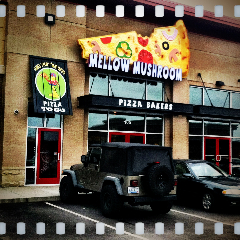 A really lazy day today — the joys of having time off. As I said to June, we can either do stuff or not do stuff — it’s totally our choice.

I picked up an app a week or so ago for free and haven’t used it yet, so I thought I’d make it my goal to create today’s picture using that app. It’s called KaleidaCam, and as the name suggests, it creates a kaleidoscope-type photo. I figured the colorful Christmas trees in the house might make good subjects and they sure did. Even slightest movements of the camera give completely different effects, which is both a blessing and curse. It’s fun to see the different results but you have to keep the phone really still to capture the one that you really like. The regular Christmas produced some good effects, but then I headed up to the small tree decorated with M&Ms and feather boas just off the kitchen. I was able to product some neat effects, but the shot you see below is one of my favorites. I don’t suspect that this is an app that will get extensive use, but it is definitely a good one to have in the collection. 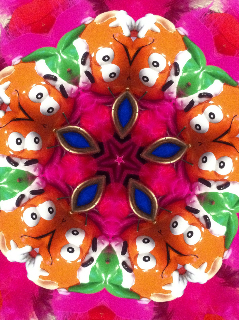 I guess we must have been good this year, because Father Christmas once again made a visit to our house, and spoiled us again. We had a leisurely start to the day and started opening presents in the late morning — even Stubby got into the act, pulling his new squeaky toy from the stocking that June showed him. Around lunch time we had a Skype call will a good friend in San Francisco and then headed over to the in-laws around mid-afternoon to share Christmas with the family. The kids were beside themselves of course and reveling in all of their gifts. One of the special presents from Santa was a Wii game system, so I helped Bill get that set-up in their living room so the kids could have at it. And then we had a nice meal — and this was on top of the of all the nibblies that had been out all afternoon. It was indeed a day of good cheer. On the way out, I grabbed this shot of Bill’s house decorated for Christmas.

We have a family coming over for dinner tonight (a King family tradition), so in order to get everything prepared in time I took the first round of cooking duties. The photo below shows all of the ingredients assembled that I need to make Nigella Lawson’s Guinness Gingerbread — my third Christmas season to make this dessert . Flour. muscavado sugar, golden syrup, assorted spices (cinnamon, ginger, cloves) eggs, baking sode and the all important Guinness. And really, how can you go wrong with something that has Guinness in it?

For the last couple of years June has arranged a Christmas decoration afternoon with the nephew and nieces, and this year is no exception. Except this year they were joined by Seth, the new foster child addition to their family. (And an affectionate little guy he is too — when he first saw me this afternoon, he came up and hugged me and said “I’ve missed you Uncle Matt.”) Join got the kids decorating Rice Krispie snowmen on the floor of the sitting area next to the kitchen, while I had the job of keeping Stubby away from the said treats! The boys progressed from that activity to our Wii system in the basement while June worked with the girls to decorate a gingerbread house in the kitchen. And after all of that was done, the kids were hungry (of course!), so we ordered in some Domino’s to take care of the growling bellies. A fun and busy afternoon for all involved. 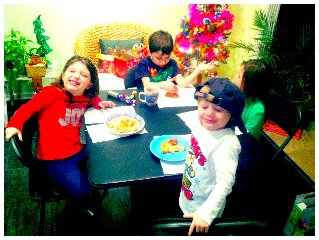 Those who know my photographic preferences know that I have a strong affinity for rust. “Look, there’s something rusty for you” June will often call out on our travels. Well, evidently my eye for rust was well tuned this morning. We were in Hobby Lobby doing some Christmas shopping when I saw something in one of the aisles that made me stop for a second look. I think it was the coloration of the sign that caught my eye initially and then the actual words — “Rust me, I’m a mechanic.” The message seemed both a bit off and vaguely appropriate at the same time, so I looked closer and it was only then that I noticed that the “T” of the first word was covered by another sign. Just shows though that any hint of rust rarely escapes my attention!